Like all Orion® solutions, the RBFE-NES tools are built natively to run on Amazon Web Services (AWS), so they seamlessly scale to your needs while remaining cost- and time-efficient.

Snapshots from equilibrium Molecular Dynamics (MD) runs are selected as initial conditions to run Non-Equilibrium Switching (NES) calculations. In the picture, the ligand A in solution (Unbound State) is quickly alchemically mutated into ligand B (and vice versa). This process is highly parallelizable in Orion and gives you the fastest and most cost-effective relative binding free energy calculations for your target-ligand complexes. 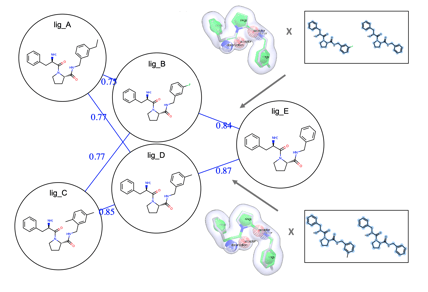 Orion’s RBFE mapper prepares a set of ligands for Non-Equilibrium Switching (NES) by creating an optimal set of “edges”, which are individual transformations of one ligand into another. These edges allow NES to run efficiently by building up a map of transformations necessary to estimate the binding free energies of the entire ligand set. Orion’s RBFE mapper (version 2021.2) considers both Maximum Common Substructure (MCS) similarities and OpenEye’s proprietary ROCS (shape and color) Score in optimizing the edge selection process.

Read more about the science behind Orion’s RBFE-NES

Ask Us Your Questions About Orion Using The Form Below