How to Speed Up Your Drug Development with Crystal Structure Prediction 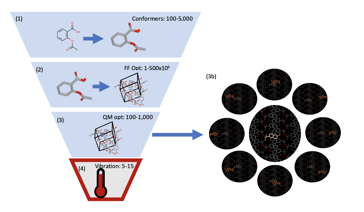 Results for tight-optimized acetaminophen crystal structures predicted with the Orion CSP workflow. The graph shows the relative QM energy (in kcal/mol) vs crystal RMSD20 (in Å) compared to a polymorph discovered experimentally. Each point is colored by space group. The 3D overlay shows the experimental polymorph (gray) compared to the predicted crystal structure with the lowest RMSD20 (purple).

* Crystal Structure Prediction (CSP) are available as a set of guided workflows available for purchase and use on the Orion cloud-native platform, or as a service performed by OpenEye’s consulting team.

Ask Us Your Questions About Orion Using The Form Below