OpenEye is pleased to announce the release of OpenEye Toolkits v2015.June. These libraries include the usual support for C++, Python, C# and Java and are now available for download. Existing licenses will continue to work, but if a new license is required please contact your account manager or email us at sales@eyesopen.com.

PDB Splitting
OEBio TK includes a powerful new API for automatically classifying and separating the various components of a macromolecular complex by their functional roles. This new API makes it easy to excise a ligand or protein/cofactor complex automatically or identify binding-site residues. The process is also fully customizable to allow internal definitions of the ligand to augment the splitting algorithm. An example is shown below of the results of automatically parsing a pdb file (13GS.pdb), extracting the ligand (Sulfasalazine) and generating a depiction. For more information, please see the Splitting Macromolecular Complexes documentation. 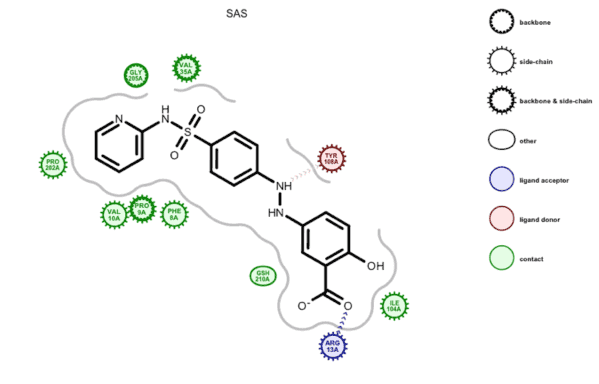 PAINS
OEMolProp TK now includes an implementation of the Baell and Holloway's classification of substrucures [Baell-2010] that are associated with assay false positives. While not perfect (e.g. the "pan" in "PAINS" refers to tests over six assay systems, mechanisms of interference are not always known, some compounds are more "pan" than others), this research is the first since the McGovern and Shoichet work on non-specific inhibition to provide real guidance to the value of an apparent screening "hit", especially when SAR turns out to be weak and of low affinity.

Matched Molecular Pairs
An important component of OEMedChem TK, matched molecular pairs now contains the facility to include transformations back and forth between a single hydrogen and a functional group. An example is illustrated below.

This improvement in the original approach yields significantly more matched pairs and information about substituent effects.

Custom Ring Template Dictionaries
This facility, added to OEChem TK, allows an organization to quickly add functionality to 2D depictions. In addition, these depictions can be "'sanitized’, i.e. reduced to an anonymous carbon skeleton," and sent back to us for inclusion in future releases. A beta of this functionality led to hundreds of new templates being added to OEDepict TK in the last toolkit release.

Anaconda Support and Pip Installation
Anaconda from Continuum Analytics is an enterprise-ready Python distribution system that greatly simplifies installing many useful Python packages, including, as of this release, all of OpenEye toolkits.

In addition, one compact command-line “pip install” call can now automatically pull down and install all of our toolkits! With a little additional work (Quick Start) this can be as easy as: