OpenEye is pleased to announce the release of OpenEye Toolkits v2016.Jun. These libraries include the usual support for C++, Python, C#, and Java.

A Linux distribution built for maximum compatibility across multiple Linux versions is now available. This will simplify the deployment of toolkits and toolkit programs across heterogeneous Linux environments. A toolkit executable built using the single-build distribution will run unmodified on most modern Linux systems, eliminating the need to build executables for each Linux release or compiler version. Currently, this single-build release is available for C++ and Python in parallel with our normal version-specific releases. In the future, we plan to make this build strategy available for all OpenEye-supported platforms.

Grapheme TK provides representation schemes that allow clear and coherent visualization of complex chemical information. Its most important function is to project the intricate interactions of a protein-ligand complex into a 2D diagram visualizing key interactions and properties that chemists can use to make fast and effective judgments.

The receptor-ligand visualization introduced in 2015.Feb has been extended to visualize two new interaction types: salt-bridges and stacking interactions (Pi and T). Accordingly, the color scheme used to depict these interactions has been revamped.

Grapheme TK has also introduced the capability to select and highlight various parts of the protein-ligand 2D depiction.

FastROCS TK has supported only Tanimoto (symmetric) similarity scoring since its inception. This release adds Tversky similarity scoring to FastROCS TK. Using Tversky instead of Tanimoto scoring can lead to a higher retrieval of actives in searches, as indicated by our large-scale comparison experiment using the DUDE database (see the chart below).

Other significant improvements in FastROCS TK include the reduced memory consumption of OEShapeDatabase to support color scoring and support for the new 361.* driver. This new driver has a noticeable performance improvement (approximately 10%), so upgrading is recommended. 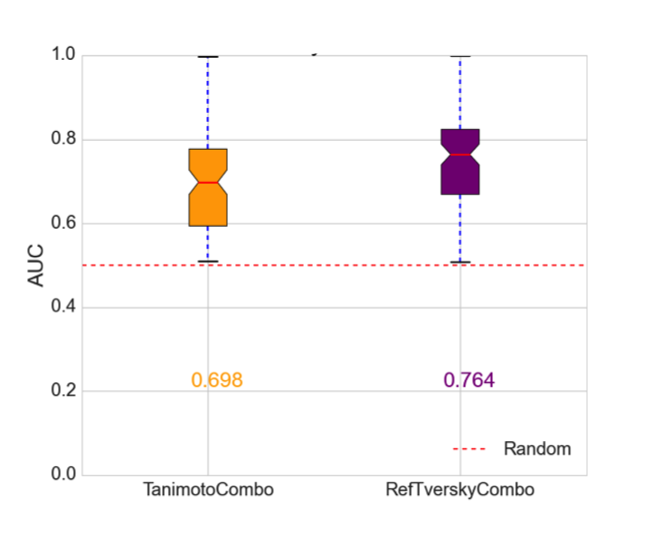 Note: OpenEye is planning to phase out Python 2 support by the October, 2017 release. As this is a substantial change for us and our customers, we are willing to help with code migration, either with advice or hands-on work with your code-base. Please contact support@eyesopen.com for more details.

OpenEye Toolkits v2016.Jun are now available for download. Existing licenses will continue to work, but if a new license is required, please contact your account manager or email sales@eyesopen.com.