OpenEye is pleased to announce the release of OpenEye Toolkits v2017.Jun. These libraries include the usual support for C++, Python, C#, and Java.

Preliminary API
The 2017.Jun release introduces the concept of a Preliminary API. This is an API that is still under development and whose improvement is driven primarily by user feedback. Its primary purpose is to provide users with early access to new functionality and technology. A preliminary API will transition to a stable API after 2 release cycles. Preliminary APIs may only be available in C++ and Python.

Hermite Representation in OEShape TK
The 2017.Jun release introduces the OEHermite class, which allows a molecule to be expanded into a Hermite representation. One area of application is the representation of a protein shape. The advantages of representing proteins by Hermites include:

Below are examples of low- and high-resolution Hermite representation images of dihydrofolate reductase (DHFR):

OpenEye will explore the potential of Hermite representations; we invite users to do likewise with this exciting new addition to OpenEye toolkits.

Interactive SVG Images
Interactive SVG images are introduced in OEDepict TK and Grapheme TK via a Preliminary API. Low-level functionality that enables users to group together graphical elements in an SVG image is available. In addition, high-level API points allow users to generate self-contained SVG images that show or hide different elements of the image based on mouse events.

Fast fingerprint search is available in two modes: in-memory and memory-mapped modes. In-memory mode involves pre-loading all fingerprints into memory and performing the search in-memory. This is the fastest search method and is only limited by available memory. Memory-mapped mode does not involve any load time penalty or memory limitation but the search can be slower. A comparison of the performance of the different search methods using 128M 4096-bit long tree fingerprints benchmarked on a m4.10xlarge AWS instance is shown in the figure below. 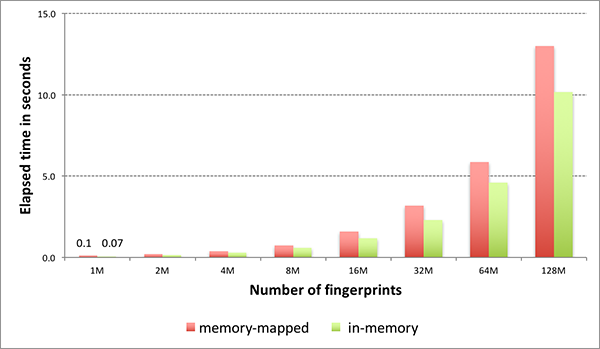 
PLATFORM SUPPORT Note: OpenEye is planning to phase out Python 2 support by the 2017.Oct release. As this is a substantial change for us and our customers, we are willing to help with code migration. Please contact support@eyesopen.com for more details.

AVAILABILITY
OpenEye Toolkits v2017.Jun are now available for download. Existing licenses will continue to work, but if a new license is required, please contact your account manager or email sales@eyesopen.com.