OpenEye is pleased to announce the release of OpenEye Toolkits v2017.Oct. These libraries include the usual support for C++, Python, C#, and Java.

The 2017.Oct release introduces Shape TK version 2.0.  This new version has been completely redesigned to make the library thread-safe, more flexible, and allows the new API to be easily extended with additional functionality. Overlay optimization in Shape TK version 2.0 is ~10% faster than the 2017.Jun version.

New features in Shape TK version 2.0 include the ability to: 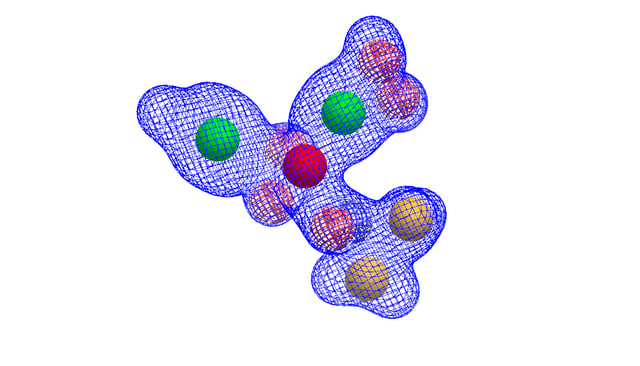 A new torsion library has been added to Omega TK based on a 2016 probabilistic analysis of torsion angles in the Cambridge Structural Database (CSD) by Guba and co-workers. This torsion library, which contains more than 500 new entries, complements the existing library, which is based mainly on an analysis of structures found in the Protein Data Bank (PDB). Replacing the existing library has four important effects on Omega’s performance:

The 2017.Oct release expands these toolkits’ capability to group a set of graphical objects in SVG images. First introduced in the 2017.Jun  release, this feature can now generate interactive images. Users can glean embedded information by simply hovering a mouse over the desired area of the image.

For example, the sequence-level depiction of a peptide, cyclic trypsin inhibitor (PDB: 1JBL), is attractive due to its simplicity (see image below). The more detailed atomic-level representation of the amino acid components of the peptide can be revealed on mouse-over without cluttering the simplified view.

Note: As this is the last release to support Python 2.7, OpenEye is willing to help with code migration.  Please contact support@eyesopen.com for more details.

AVAILABILITY
OpenEye Toolkits v2017.Oct are now available for download. Existing licenses will continue to work, but if a new license is required, please contact your account manager or email sales@eyesopen.com.