OpenEye is pleased to announce the release of OpenEye Toolkits v2019.Apr. These libraries include the usual support for C++, Python, C#, and Java.

Changes to the FastROCS algorithm, including porting the static color calculation to GPU, have resulted in a more than 2x performance improvement of FastROCS on some GPU systems. Benchmarking was carried out on AWS GPU instances and compared to the 2018.Oct version of FastROCS TK: 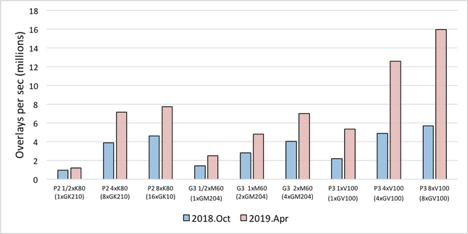 Performance comparison between the 2018.Oct release and the 2019.Apr release using OpenEye’s standard benchmark dataset of 14M conformers on AWS

For some systems, the standard benchmark dataset of 14M conformers is not large enough to fully saturate the GPUs. To demonstrate the potential performance of larger databases, a 2 billion conformer subset of Enamine was searched on suitable AWS instances. FastROCS searched the 2 billion conformer database on an AWS P3 instance with 8x Nvidia Tesla V100 GPUs at a rate of over 44 million overlays per second:

A new compressed file format with the extension OEZ has been added to OEChem TK. This format uses the Zstandard algorithm to efficiently compress individual multi-conformer molecules, making it well-suited to work with OEMolDatabase for fast read-only random access to molecules. See more details in the Compressed Input and Output section of the OEChem TK documentation.

Note: This new file format is not backwards compatible. OpenEye applications and toolkits released before April 2019 will not be able to read or write this file format.

Following our tradition of providing easily comprehensible visualization of complex data, OEGrapheme TK can now depict Ramachandran plots.  These plots provide an easy way to examine the distribution of backbone dihedral angles in a particular protein. For instance, structure quality can be assessed by identifying residues whose backbone ϕ and ψ angles are outside energetically accessible regions. Grapheme TK uses the data and classifications available in OEBio TK, which were extracted from the open-source Computational Crystallography Toolbox.

OpenEye Toolkits v2019.Apr are now available for download. Existing licenses will continue to work, but if a new license is required, please contact your account manager or email sales@eyesopen.com.


About OpenEye Scientific
OpenEye Scientific is a privately held company headquartered in Santa Fe, New Mexico, with offices in Boston, Cologne, and Tokyo. It was founded in 1997 to develop large-scale molecular modeling applications and toolkits. Primarily aimed towards drug discovery and design, areas of application include: