OpenEye is pleased to announce the release of OpenEye Toolkits v2018.Feb. These libraries include the usual support for C++, Python, C#, and Java.

The new OEFastFPDatabase::GetHistogram method performs an NxN search of a molecular database and returns a histogram of scores. This is useful information for analyzing collection diversity without needing disk space for NxN similarities. OEFastFPDatabase::GetHistogram in CUDA mode performs 2.5 billion comparisons per second (as benchmarked on an AWS P3 instance with an NVIDIA Tesla V100 GPU) compared with 12.5 million comparisons per second when using the memory-mapped mode on the CPU. 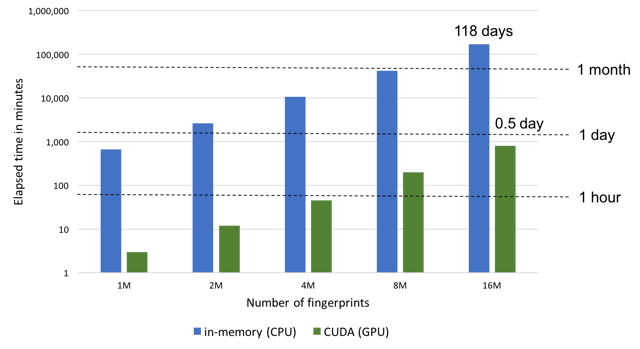 Conda toolkits for Python are now available as a package named openeye-toolkits in the openeye channel on the default conda.anaconda.org server. On Linux and macOS, the toolkits can be installed into a Conda Python environment via conda install -c openeye openeye-toolkits. On Windows, Conda packages can be managed using Anaconda Navigator.

OpenEye Toolkits v2018.Feb are now available for download. Existing licenses will continue to work, but if a new license is required, please contact your account manager or email sales@eyesopen.com.